Where do the scarecrows go after the children of the hay event?

I’m trying to dance with one of them for an instinct.

Why did I think it was a joke and the title was the setup?

They can be anywhere with people, just do more stuff and you’ll find them walking.

I found a scarecrow in Suburbsville 5 minutes after I posted this. To compensate I will not tell a joke, but a story. This Saturday I’m “wine wenching” at the Michigan Renfest for two local theatre groups, so today’s post is a bit early. The festival has themed weekends to keep the public returning. This weekend they are having a scarecrow competition. I will definitely visit it for ideas. You may remember a month ago I wrote and showed pictures of our excavation for a new septic system. We are now trying to return it to being a lawn. That means preparing the soil surface – this area is loaded with rocks from the glaciers that rolled over it aeons ago – then seeding and adding chopped straw bedding.

The call of a crow to others reminds me that a flock of them is called a Murder of Crows. Yeah, that definitely makes sense. Then there’s the blue jay calling me a thief as I lay down that straw to hold in the moisture and maybe keep the birds away.

Right now I’ve got some bits of unseeded patches over the septic tank and on the hillside to return and do. Otherwise it’s all set except for our meadow down by the barn.

All of this made me search for stories about crows – there’s a LOT! and I even found one about a scarecrow. First come crows and then come scarecrows, so that’s the order I’ll show the stories, then give a way to find even more stories online about crows. 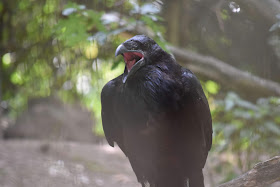 Back in 1919 the designation of the Arctic people was just lumped under the name of Eskimo. This story is from Frances Jenkins Olcott’s nature anthology, The Wonder Garden. Today we would say more about the specific nation within either Alaska or Nunavut. 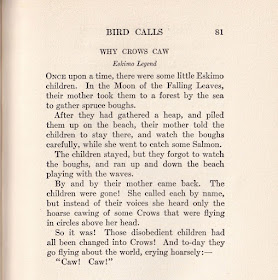 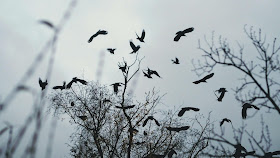 Right after posting that I went out to hang up my laundry and heard from up the road so many crows cawing that it sounded like dogs barking. Sure hope they don’t feast on my seed. That story was both an interesting pourquois tale (explaining how or why something became the way it is) and a cautionary tale. I doubt it will change the behavior of children, but have you ever noticed how whenever someone is told to do or not do something in a story, it’s guaranteed to have the opposite effect?

This next story is by Angela M. Keyes in her book,Stories and Story-telling, also from 1911. I found her book is online, but nothing about her online except the book says she was Head of the Department of English, Brooklyn Training School for Teachers and almost a quarter of the book is devoted to how to use stories with children. I love her preface: 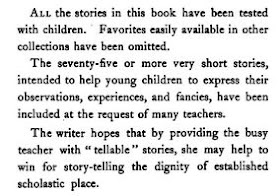 those “very short stories” often are only a paragraph long. They come after the section on storytelling and some 32 stories. While she may have omitted “favorites easily available in other collections”, several now fit that availability.

Reading the story, I can see its roots in oral telling. The repetition works better there than in print, but it’s needed. The magical elements she puts in the story seem right in today’s tales where Harry Potter might summon Magic Darkness and Moving Wind, to say nothing of the scarecrow himself. 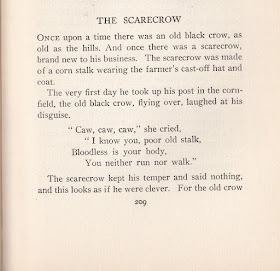 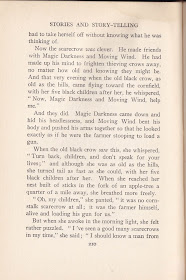